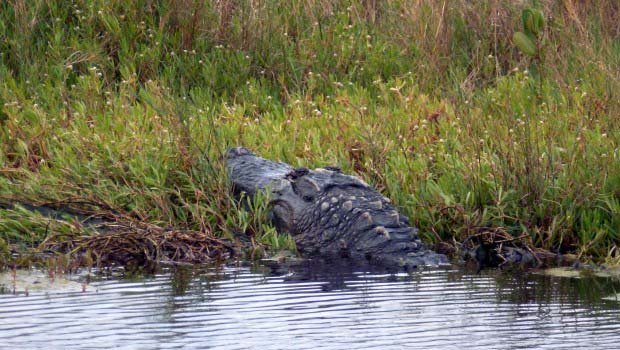 When fishing in Florida it is common knowledge that any body of water can and probably does contain alligators. I have seen them in lakes, rivers, brackish water, saltwater beaches, golf courses, and even shallow roadside ditches. However this doesn’t change that fact that it really gets your adrenaline pumping when you see a big one floating close by or sliding into the water while you’re sitting in a kayak two inches off of the water.

Kayak Fishing
When you’re in a kayak right on the surface of the water it is easy to be concerned about large gators floating nearby. On the plus side, alligators will almost never attack a kayak. I’ve been fishing in water with gators for quite a long time and the only time I’ve ever been truly concerned has been when I had a spotted trout on the line and a large gator was slowly moving toward my kayak while I was reeling it in. The thrashing of a fish on the line is like a dinner bell to gators and this particular one didn’t bat an eye when I yelled at him or slapped my paddle on the water. Needless to say I released that fish very quickly and paddled out of the area. I have also had a small five foot gator steal a bass off my line when I was fishing from shore. I had hooked a bass on a crankbait and was reeling it in, when it suddenly got very heavy. I thought that the bass had taken my line around an underwater log. I was able to slowly pull the ‘stuck fish’ toward me since I was using 30lb braid due to the thick weeds in the area. I finally got it within 10 feet of the bank and was hoping to get my expensive crankbait back, when a small gator popped right out of the weeds. Talk about a surprise, I was looking to grab my lure and instead was face to face with a gator. Unfortunately I had to cut the line because he was hooked. 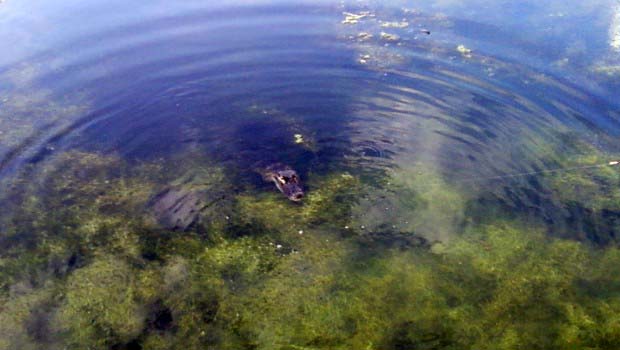 Fishing from the shore, small gator stole a bass off the line 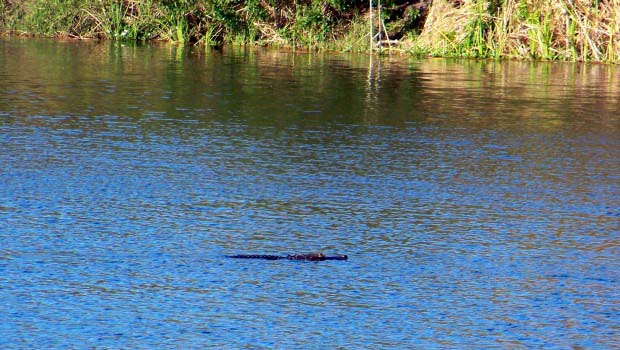 Gator water profile, sometimes you can only see their eyes and snout

Wade Fishing
I personally would not wade fish anywhere in Florida both fresh and saltwater included. Between the stingrays, gators (yes they are in some saltwater areas), bull sharks, jellyfish, and reckless boaters in saltwater, and the gators and cottonmouths in freshwater it just doesn’t sound like a fun day. Also the occasional crocodile has been spotted in some areas of Florida and those will actively stalk humans. 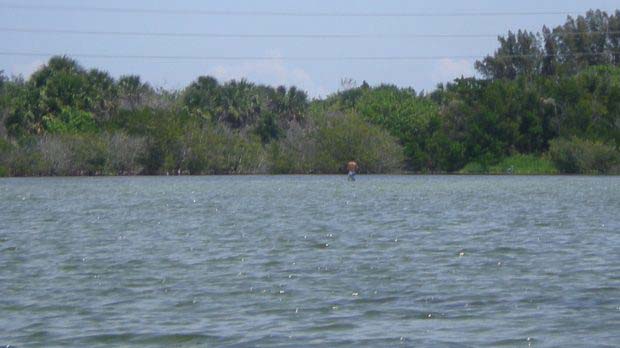 Gator Tips
Don’t feed alligators ever. This causes them to lose their fear of humans and they associate humans with food, which is very bad.
If you see a gator, just paddle around them and keep your distance.
Be wary during May when it is mating season. Gators are much more aggressive during this time period.
Try not to fish at night from a kayak in an area with gators as they have excellent night vision and are more active then.
Don’t use a stringer to keep your fish in an area with gators. They will steal a free meal and you’ll need a new pair of pants if they steal the meal that’s two feet from you.
When an alligator slips off the bank and into the water it’s not coming to get you. It is scared of you and wants to be hidden in an area that is safer.

Gators I’ve Encountered
These are all pictures I have taken of gators I’ve encountered while fishing. 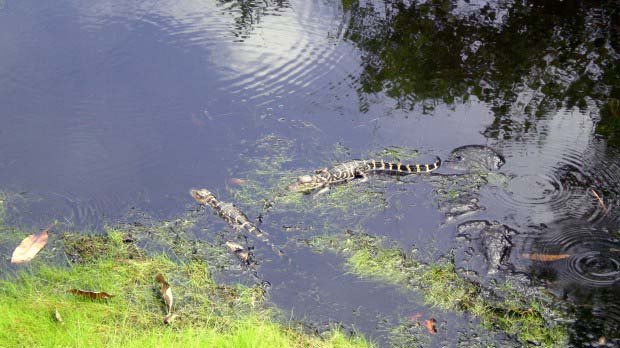 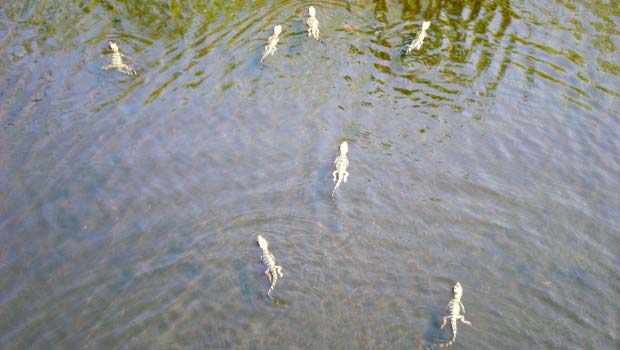 Baby alligators, be careful around them, the mother will be close and will be aggressive 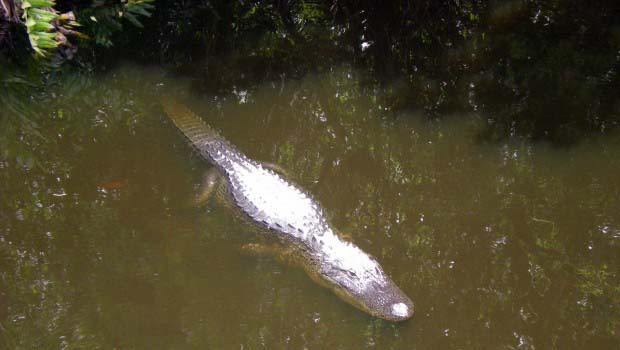 Mother gator protecting babies, she was not happy 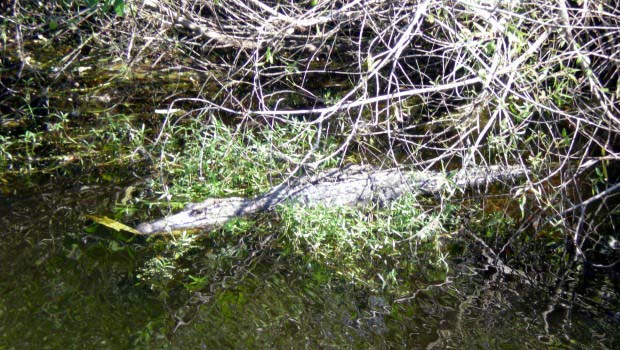 Gator camouflage is very good, this one is disguised as a log 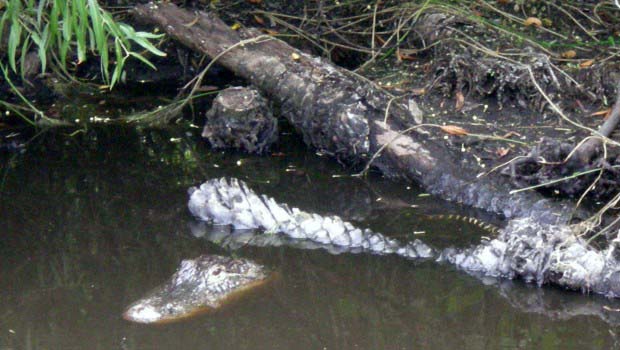 Gator in murky water with just its head showing

Gator Attacks
Attacks can still occur and there always seem to be a few on the news each year. An area I used to mountain bike and fish in had an 11 foot gator bite a teenage boy on the head less than a half a mile downstream from where I took the pictures below. More recently a 60 year old woman was attacked by a 10 foot gator while wading in this same river only about 50yds upstream from the pictures. Both gators were captured and killed and I’d be willing to bet that it is very likely that this gator was one of them, as they are very territorial and you don’t get many monsters living in an area that small. 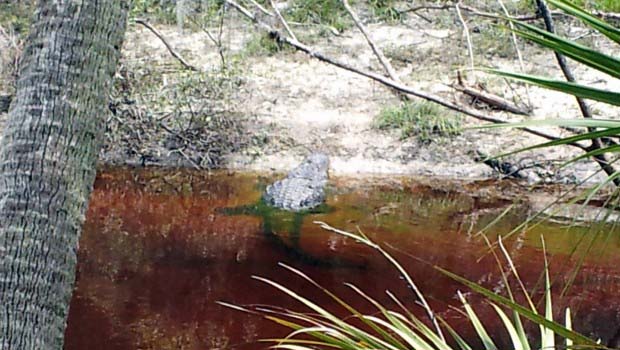 Massive gator sunning on the bank 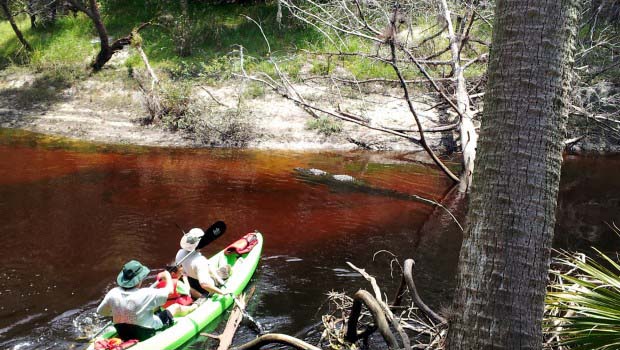 Kayak rolls up on monster gator 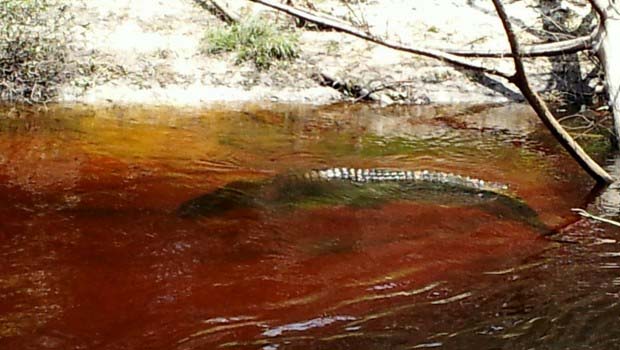 Overall
Gators are common in Florida and anytime I’m in or near the water I have to understand that. I have never seen or heard of a gator launching at someone in a kayak, but I am always mindful when fishing water with gators to keep my arms and legs in the boat and keep an eye out when I’ve got a fish on the line. In general gators should be afraid of humans, but be safe and don’t bet your life on it.

Check out our other articles about Kayak Fishing: