Introduction
Triple Eight Professional has a variety of small performance knives that are great for everyday use. Their knives feature a Patent Pending T8P Spinner Action opening system, which is one of the most unique, safe, and functional systems that I have had the opportunity to work with. The knife I was able to work with was the Rhino Knife, which is designed as a performance knife for the hunter and outdoorsman. The knife incorporates elements that are suited for bass fishing, so naturally we had to see how it would work for the average bass angler.

Actual Testing/Use
It was instantly obvious that the compact Rhino Knife was suited for fishing when I was using it to rig up my rods. The knife is user-friendly and it is great to grab when you have one hand busy holding a knot. The design of the knife is awesome, and the action opening system is a great concept. I enjoy seeing the attention to detail especially in a small knife, as many companies overlook the quality that can be offered in a small tool.

Opening the knife is very simple, and it all revolves around the T8P axle. All you have to do is snap open the top half of the handle and rotate it around the axle until you are able to snap the bolt into the other side of the handle. In the process the blade opens and locks into place. The Rhino can open and close one handed, but it is easier to open it with both hands. I would say the single best feature of the knife is the gut hook which I use as a line cutter. It allows you to hook the line and cut it in one motion which is very nice when you are out on the water.

One negative aspect of the knife was the fact that it did not include a rubber or other type of grip built into the handle. The knives offered by Triple Eight Professional are already great quality, however if they offered one with a rubber grip, I feel that fishermen and outdoorsmen would be even more inclined to carry this knife. In addition, the blade of the knife was dull on arrival and required sharpening. I would assume that this is just a random occurrence because the quality of the knife seems to be very high. 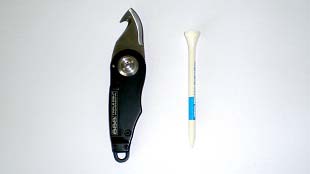 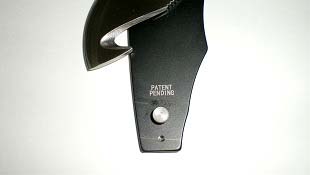 Pros
Gut hook that functions as a line cutter on the back of the blade
T8P Spinner Action is unique, simple, and functional
Knife is small and compact for effortless carrying
Strong and solid pocket clip

Overall
The Rhino is a solid knife that is loaded with features from Triple Eight Professional. They have obviously paid a lot of attention to detail when it comes to creating these small yet effective knives. In a general fishing situation, the Rhino Knife functions very effectively due to its compact design, line cutter, action opening system, and heavy duty construction. I would highly recommend that anglers check out the available knives that Triple Eight Professional has to offer, especially if the company creates one of these high performance compact knives paired with a rubber handle grip.