I received a press release from Rapala today regarding their new Scatter Rap lure that is supposed to present a totally new type of erratic and evasive action.  More often than not I read these releases and let them sit in my inbox as I receive many each week and I typically feel that most of them are rather dull. I will admit, the reason I decided to give this new product a second look is because I am a Rapala man through and through. I feel they have developed a quality product that works well and they pay attention to detail, which sometimes can make all the difference when you’re out on the water. This new design appears to be different from others I have seen before as it has a large and deep bill which seems to give it some dynamic action. Check out the new Scatter Rap and let me know what you think; the video really shows you how this lure works. 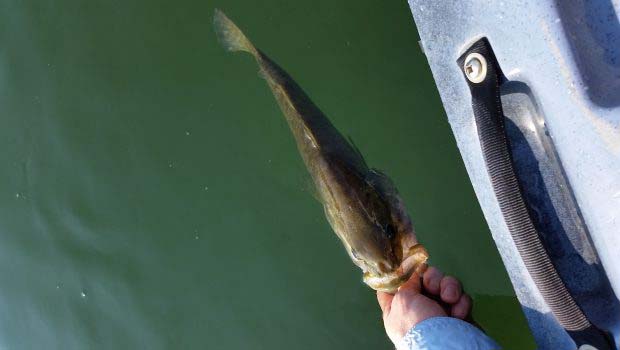 The No. 1 Name In Fishing Lures Introduces The ‘Evasive’ Scatter Rap®

“The Scatter Rap brings game-changing action to the water produced by an innovative and uniquely designed curved or ‘Scatter Lip,’ which creates an effortless and instant evasive swimming pattern,” explains Mike Iaconelli, Rapala and VMC® pro angler. “By varying reel speed, crankbait addicts will see an immediate sweeping action that perfectly mimics a spooked baitfish fleeing attack, moving from one side to the next – triggering reactive bites.”

Ideal for bass and other multispecies gamefish, the Scatter Rap Series is available in 14-16 classic and new color patterns that will have any game species chomping at the bit for a taste. Cast or trolled, the Scatter Lip allows the baits to swim between the five-and nine-foot water column – providing anglers with the ideal lure for multiple applications.

“The Scatter Rap Series does what no other lure can, it brings the natural scenario of a baitfish fleeing a predator to life by omitting a scattering action anytime, anywhere,” says Iaconelli. “The only difference – unlike in nature – this one doesn’t get away.”

Kicking off this patent pending, groundbreaking series, the Scatter Rap® Crank features a balsa body with a curved or ‘Scatter Lip,’ which creates the most evasive, erratic, aggressive sweeping action ever seen.

“This family of lures is a game changer through and through,” says Mike Iaconelli, Rapala® and VMC® pro angler. “The erratic action brings the natural scenario of a baitfish fleeing a predator to life by moving effortlessly from one side to the next – triggering the bite.”

Ideal for bass or other multispecies gamefish, the Scatter Rap Crank can be cast or trolled and is available in 14-16 classic and new color patterns, and swims between six-and nine-feet.

Break away from the pack and get Scattering.

Carrying on the tradition, the Scatter Rap® Minnow features the legendary Rapala® minnow body profile. With its innovative ‘Scatter Lip,’ it flips traditional casting and trolling methods for all species on their heads, impart to the all-new aggressive, evasive, erratic sweeping action that defines the Scatter Rap family.

“I’ve seen fish of all species on various bodies of water get aggressive over a lure but the Scatter Rap Minnow tops them all,” says Al Lindner, legendary angler and National Freshwater Fishing Hall of Famer. “This unique action simply turns fish on.”

The Scatter Rap Minnow is available in 16 color patterns to match any species, forage or water clarity types. With a diving depth of six-to eight-feet and VMC® Black Nickel Hooks, this newly infused evasive action lure is ready to tango.

The Rapala® Scatter Rap® Shad builds on the legendary action of the Rapala Shad Rap® with a twist – an all-new evasive swimming action – impart to a thinner body design and all new curved ‘Scatter Lip.’

Matching the most common forage perfectly, the Scatter Rap Shad is ideal for all species and lures big fish in with an industry first, fleeing or aggressive sweeping action.

“The Scatter Rap Shad will become one of the great new go-to lures for anglers fishing multiple species in a variety of applications,” explains Ott DeFoe, Rapala pro angler. “The lure swims with an aggressive, panicked, fleeing action. Pair that with multiple color patterns and anglers will see just how successful this revolutionary new lure and action is when they hit the water.”

Cast or trolled, the Scatter Rap Shad is designed to cruise between five-and eight-feet in depth. With VMC® Black Nickel Treble Hooks and 16 must-have color patterns, this one-of-a-kind lure’s action will have anglers screaming “get the net” all day long.

The ‘CountDown’ method is a time-tested approach that allows anglers to reach suspended fish at any depth with ease. Now, Rapala® boosts this technique with the ‘evasive action’ of the new patent pending Scatter Rap® CountDown®.

“With this lure, anglers for the first time will be able to create the evasive swimming action of a baitfish fleeing a predator at a suspended depth,” remarks Bernie Schultz, Rapala pro angler. “Not only will anglers be able to get down to the strike zone with precise consistency, but this bait will instinctively trigger the bite with its madly erratic, evasive sweeping action.”

Anglers can choose from 16 different color patterns including Fire Minnow, Bleak, AYU and much more.